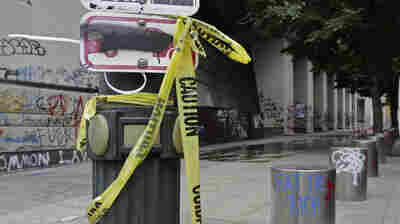 Graffiti from recent demonstrations covers an area outside of the Mark O. Hatfield Federal Courthouse in Portland, Ore., on July 8. Protesters who have clashed with authorities there are facing off not just against city police but a contingent of federal agents who reflect a new priority for the Department of Homeland Security: preventing what President Donald Trump calls “violent mayhem.”

Agents are deployed in the Oregon city amid anti-police protests. Homeland Security official Ken Cuccinelli tells NPR the tactic is being used to move detainees to a “safe location for questioning.”

Experts Say Police Use Of Tear Gas Is ‘Irresponsible’ Amid Pandemic