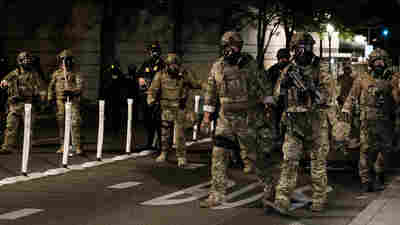 Federal officers prepare to disperse the crowd of protesters outside the Multnomah County Justice Center on July 17 in Portland. The use of federal agents has only made a bad situation worse, state and local officials told NPR.

Demonstrations continued in Portland, Ore., Saturday night over police brutality and racism. State and local officials criticized Trump’s use of federal agents to try to quell the protests.