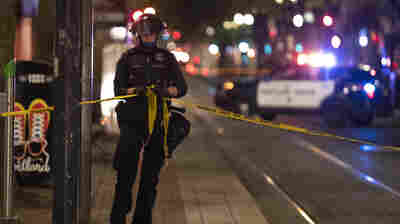 A Portland police officer ties a police line around the scene of a fatal shooting in Portland Saturday. It’s the latest incident after weeks of Trump supporters clashing with counterprotesters.

President Trump blamed Portland Mayor Ted Wheeler for losing control, while the mayor responded that it was violence that Trump “helped create.”