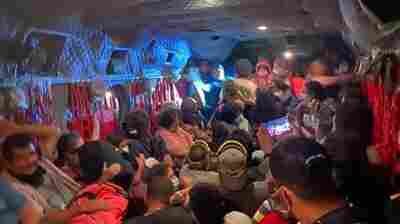 Dozens of evacuees are evacuated to safety on a Cal Guard Chinook on Saturday, after the Creek Fire in central California left them stranded. More than 200 people were airlifted to safety after the fast-moving wildfire trapped them in a popular camping area in Sierra National Forest.

An estimated 45,000 acres are burning in Fresno County, where more than 200 people were rescued overnight, as military helicopters plucked the stranded from a reservoir in Sierra National Forest.