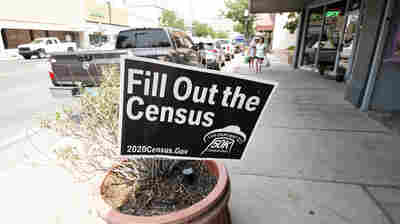 A sign promoting the 2020 census stands in a planter in Roswell, N.M., in August. A federal judge has ordered the Trump administration to continue holding off on wrapping up the census for now.

After the Trump administration missed a filing deadline for court documents, a judge has ordered the wind-down of the census to remain on hold, throwing door-knocking efforts further into uncertainty.