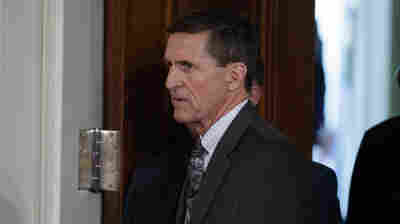 In this Feb. 13, 2017 file photo, Mike Flynn arrives for a news conference in the East Room of the White House in Washington.

President Trump has pardoned his first national security adviser, Michael Flynn, who pleaded guilty to lying to the FBI about his contacts with the Russian ambassador. It was announced on Twitter.