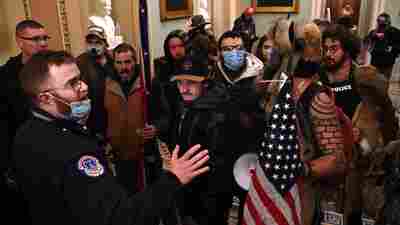 Pro-Trump extremists, including Jacob Chansley, the “QAnon shaman” known for his painted face and horned hat, intended “to capture and assassinate elected officials,” the Justice Department says in a new court filing. Chansley was taken into custody in Arizona.


Insurrection At The Capitol: Live Updates

The top U.S. prosecutor for the District of Columbia cited a “disconnect” after federal prosecutors in Arizona said there was “strong evidence” that pro-Trump rioters intended to kill officials.

What We Know So Far: A Timeline Of Security Response At The Capitol On Jan. 6