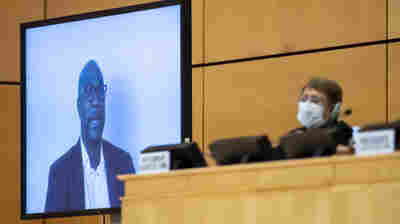 Philonise Floyd speaks to the Human Rights Council in Geneva via video Wednesday, nearly a month after the killing of his brother George incited widespread protests against police brutality. Michelle Bachelet, the U.N. high commissioner for human rights, looks on behind her face mask.

George Floyd’s Brother To U.N. Human Rights Council: ‘I Am Asking You To Help Us’