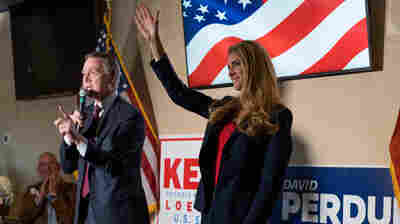 Sens. David Perdue and Kelly Loeffler speaks at a campaign event earlier this month. Both are competing in runoff elections in January that will determine which party controls the Senate.

The Republican incumbents are baselessly casting doubt on the state’s voting system. Some in the GOP worry their words could depress voter turnout and cost the party two Senate seats.